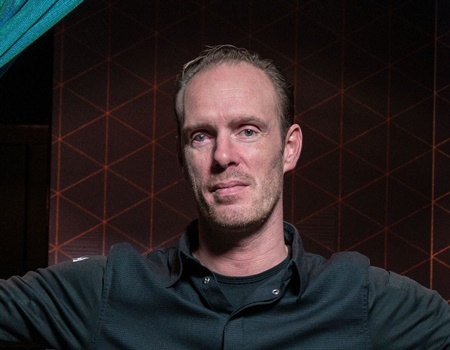 “I grew up in the countryside, I used to work in the fields,” says Gast. “My parents had careers, so I was doing all of the cooking.”

It was a career test at school that set him on his culinary path. As a young man, he headed to London to do his training, but it proved to be a culture shock. “The way people communicated with each other, it wasn’t really a team effort,” he recalls. “Everybody was shouting, throwing things. I was so stressed out that I cooked a lobster in a microwave!” Gast describes his time working under the domineering chef as “the worst time in my life”.

But the experience propelled Peter in a different, more harmonious direction. Returning to the Netherlands, he set up his own restaurant, 't Schulten Hues in Zutphen (2002-2018) which featured mostly herbs and flowers cultivated and harvested by Gast. In less than two years he was awarded his first Michelin star, aged only 25.

In September 2018 Peter and his wife moved to Amsterdam and opened their restaurant Graphite in the middle of the center. In January 2020 he received a Michelin star in Graphite. Graphite is a mysterious and inspiring place where all your senses come to life. You can only enter with a QR code. The atmosphere can best be compared to that of a trendy club. Round tables with semi-circular benches, very intimate and inviting. Slightly mysterious but relaxed. The fifteen-course menu surprises you during the whole dinner and are combined with wine creations that are 'spot on'. They blend in perfectly with the combination of eel, apricot, green asparagus and sherry. Or the monkfish with miso, horseradish, crab, green apple and turnip greens.

You can find out more about which cookies we are using or switch them off in settings.

This website uses cookies so that we can provide you with the best user experience possible. Cookie information is stored in your browser and performs functions such as recognising you when you return to our website and helping our team to understand which sections of the website you find most interesting and useful.

Strictly Necessary Cookie should be enabled at all times so that we can save your preferences for cookie settings.

If you disable this cookie, we will not be able to save your preferences. This means that every time you visit this website you will need to enable or disable cookies again.