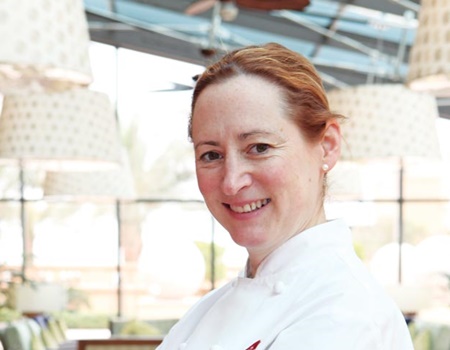 Awarded an MBE in recognition of her achievements and continuous commitment to her craft, Chef Claire Clark is considered one of the best pastry chefs in the world. Chef Claire is currently working as an International pastry consultant and director of her bespoke high-end patisserie company, Pretty Sweet.

In 2003, during her three years as a senior pastry lecturer at the Cordon Bleu culinary institute, Chef Claire helped open London’s first Grand Café, The Wolseley, where she worked alongside Head Chef Chris Galvin for two years before being recruited to Chef Thomas Keller’s three Michelin star restaurant, The French Laundry, in California. After five successful years in America, Chef Claire returned to London and established Claire Clark Consulting, with clients that include the British Parliament’s House of Commons. Through Pretty Sweet, Chef Clair has also been recruited to supply pastries for Buckingham Palace and many A-list celebrity clients.

You can find out more about which cookies we are using or switch them off in settings.

This website uses cookies so that we can provide you with the best user experience possible. Cookie information is stored in your browser and performs functions such as recognising you when you return to our website and helping our team to understand which sections of the website you find most interesting and useful.

Strictly Necessary Cookie should be enabled at all times so that we can save your preferences for cookie settings.

If you disable this cookie, we will not be able to save your preferences. This means that every time you visit this website you will need to enable or disable cookies again.